After Manny does a valiant rescue by saving Mr. Lopart from falling off the building, Kelly calls the Fire Dept. as Chief Eduardo is impressed by Manny’s quick skills in saving Mr. Lopart’s life, Kelly and the tools team up in an emergency as Chief Eduardo makes Manny and Kelly as volunteer firefighters, but the crew where struggling in their training as the tools felt that firefighting is too dangerous for them as they also learned of Mr. Lopart's so-called "bigger is better" idea for his candy store. 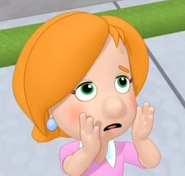 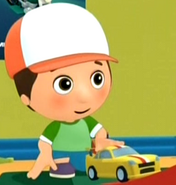 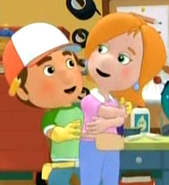 Manny and Kelly moment during "Stick to It"

Manny and Kelly helping each other
Add a photo to this gallery
Retrieved from "https://handymanny.fandom.com/wiki/Firefighter_Manny?oldid=10151"
Community content is available under CC-BY-SA unless otherwise noted.